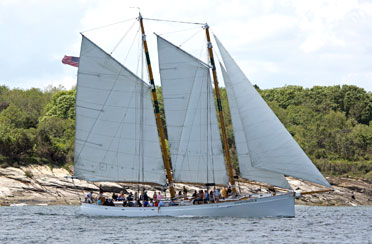 This elegant, 80-foot, turn-of-the-century-style pilot schooner has been a local mainstay in Newport since it joined the Scarano boat fleet in 1999. It has entertained thousands of Newport visitors and locals, and has attracted a large and growing number of passionate regulars who can’t stop coming back for more. Many visitors consider multiple trips aboard the schooner to be a regular and highly anticipated part of their warm-weather seasons. The Schooner Adirondack II features plenty of seating, teak decks and impressive mahogany trim. Guests always enjoy the friendliest and finest service.

Adirondack II has all the elements of a turn of the century pilot schooner and would have looked right at home in Narragansett Bay 100 years ago. The rig on Adirondack II is held in place with Kevlar shrouds, and her underbody carries external ballast taking advantage of modern wooden boat building techniques. The modern underbody is certainly designed in the spirit of the original pilot schooners, which used all the technology available to them to make their vessels as fast and yet as safe as possible. These modern design techniques help to provide a more exciting sailing experience.

Built for speed, pilot schooners were the coastal guide and rescue boats in the bygone era of sail. The primary purpose of the pilot schooner was to deliver a pilot (a seaman with knowledge of local waterways) to the incoming ships to guide them into safe port. Operation of a pilot schooner was a highly competitive business. The fastest schooners were the ones that got their pilots the most work. Pilot schooners patrolled the harbors and often rescued vessels arriving late at night from the dangers of an unfamiliar coastline in dark and threatening waters. Traditional in its appearance but modern in its design and construction, Adirondack II provides unparalleled speed, safety and comfort.

The Adirondack II is a gaff-rigged schooners with a wooden hull, and was completed by Scarano Boat Building in Albany, NY. Schooner Adirondack II was completed in 1999, and was brought to Newport Harbor when the original Schooner Adirondack departed Newport to begin operating out of Chelsea Piers in New York City. She is Coast Guard certified for 57 guests. Her masts reach over 70 feet above deck and has just under 2000 square feet of sail area. She is 65 feet on deck, 80 feet overall, and has a draft of 7 feet. On a high wind day, it is not uncommon for her to reach 10 knots under sail. She is a very lively and fast vessel, and all of her captains feel that she is an absolute dream to operate!

Join us in watching the 4th of July fireworks display from the Town of Jamestown aboard the Adirondack II on the evening of July 1st. Take in unobstructed views of Jamestown’s fireworks from the water from the decks of our beautiful schooner. Don’t worry about driving over the bridge, standing in line, or waiting for a place to sit in Jamestown. Join us for the best seats in the house! (Alcoholic drinks range from $3-$6)

Newport puts on an elaborate Fireworks display from their shores in order to celebrate the independence of our Nation. While the fireworks can be seen throughout the area, the best place to see them is from the deck of the Adirondack II, where there are no visual obstructions to take away from the show. While onboard, Take in unobstructed views of Newport Bridge, historic lighthouses, stately waterfront mansions, and Fort Adams! (Open beer and wine bar.) **Special Note: This event takes place on the 2nd of July.

See Newport in a whole new light–under the light of a full moon. A Full Moon Sail aboard Adirondack II is the most serene way to experience Newport. Within minutes of leaving the dock, you’ll forget the distractions of life on land and find relaxation in the feel of the salty ocean breeze. This is a great choice for a romantic outing or just an opportunity to enjoy an incredible, quiet and romantic sail! (First glass of Prosecco is free and complimentary truffles!)

Join us in watching the end of the summer fireworks display from the decks of our beautiful Schooner just outside of the Newport Navy Base. Take in unobstructed views of Newport Bridge as we sit off the Naval Station for the best viewing of the fireworks in Newport. Buy your tickets and leave the dock with us at 8:30. Sit back and relax and enjoy the display. No standing in line or looking for a seat at the base. (Alcoholic drinks range from $3-$6)

Experience a Newport sunset from the water on this evening sight sail of Newport’s historical waterfront. Climb aboard the Adirondack II, an 80-foot pilot schooner for an evening of fun and relaxation, away from the hustle and bustle of everyday life. Your knowledgeable captain and crew are always ready to answer questions about the sights and history of Newport Harbor and its surrounding areas, so feel free to ask them whatever you like! While you experience the joy of a leisurely sailing cruise, you’ll see views of Newport Harbor and Narragansett Bay with the setting sun as a perfect back drop. (Alcoholic drinks range from $3-$6)

Despite its name, this event runs in moderate weather! Step aboard our turn-of-the-century style schooner, Adirondack II, for a traditional sailor’s cocktail arrrgh (hour)! Newport Dark and Stormies, a local version of the traditional drink and a favorite among the local sailing community, are served aboard this sail. The drink features Newport’s own Thomas Tew’s Rum and Rhode Islands Yacht Club Ginger Beer, developed to go with Pirate Tew’s rum. Schooner sails are the perfect way to see the sights of Rhode Island. Adirondack II is a sailing vessel with ample seating, teak decks, and just under 2,000 square feet of sail to take us through Narragansett Bay. (Alcoholic drinks range from $3-$6)

Our classic afternoon sails are the perfect way to see the sights of Rhode Island. Experience Newport like you never have on a sail aboard the Adirondack II, an 80 foot pilot schooner. A smooth, gentle sailing vessel with some speediness to boot, the Adirondack II offers a comfortable ride that is brisk and invigorating. Within minutes of leaving the dock, you’ll forget the distractions of life on land, as you experience the joy of a leisurely sailing cruise. (Alcoholic drinks range from $3-$6)

Rise and shine, you’re in Newport, RI! Start your day with a brisk, invigorating sail aboard Adirondack II. Feel free to bring a brunch on this early day sail – our crew completes your experience with perfectly poured Mimosas available for $4 each! Mimosa Morning Sails are the perfect way to see the sights of Rhode Island before hitting the beach or the many shops of Thames Street.

Thanks for signing up!

Looking for a unique gift to give your friend or loved one? We have a variety of cruises that will make the most perfect gift.
BUY GIFT CERTIFICATE

SEE OUR CALENDAR OF EVENTS

Have a specific date you would like to join us for a date night, Anniversary, or Birthday? Check out our online calendar.
VIEW ONLINE CALENDAR

Sail out into Newport Harbor and impress your guests. Step aboard the legendary Schooner Adirondack II or Sloop Eleanor for a private charter. These yachts are perfect for Corporate outings, Birthdays, Anniversaries, Weddings, and more. Read more »

Sail out into NY Harbor and impress your guests. Step aboard one of our classic vessels for a private charter. These yachts are perfect for Corporate outings, Birthdays, Anniversaries, Weddings, Team Building and more. Read more »